It is the time of year that dahlias are in full bloom in Michigan - and many fall brides love the look of them in their floral arrangements.  I recently provided flowers for a very sweet couple, and dahlias were on the list of flowers to have.  Because I didn't have enough white dahlias growing in my own garden, I had the pleasure of going to the Hamilton Dahlia Farm in Hamilton, Michigan to hand pick the blooms that would grace my bride's day.  I'm looking forward to seeing the professional wedding photos, but in the meantime, here is some of the fun that we had leading up to the special day: 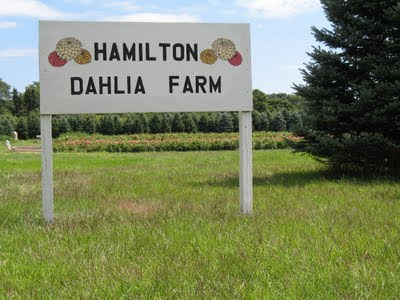 Rows and rows of colorful dahlias: 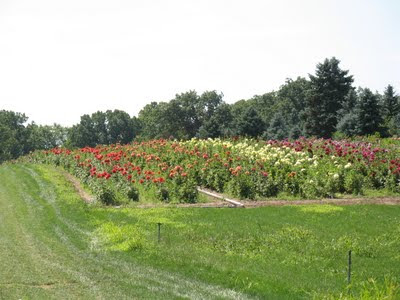 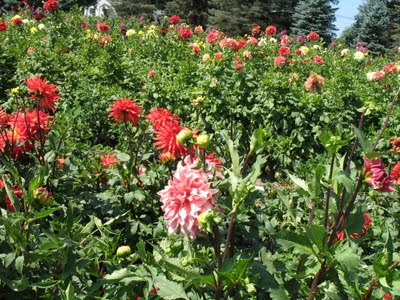 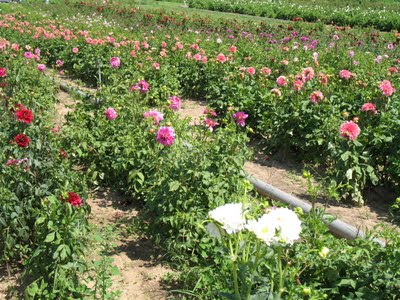 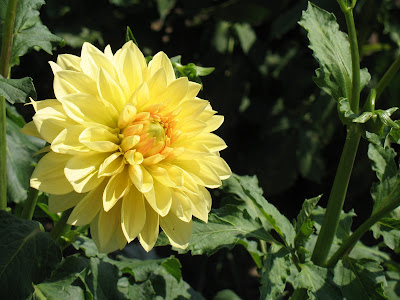 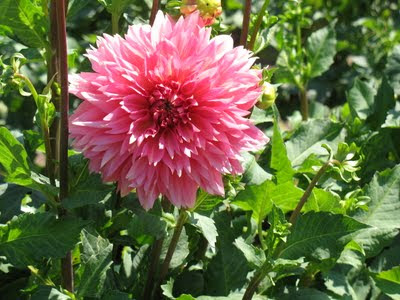 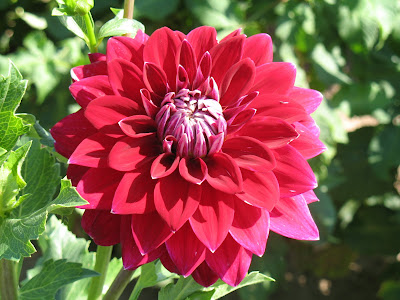 Farm helpers had been busy cutting for market day: 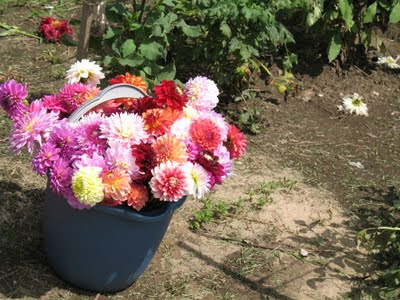 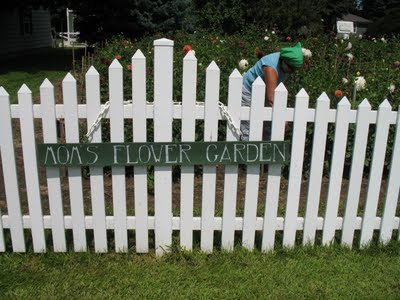 Paige, age 12, was thrilled that while mom was cutting white dahlias, she was allowed to pick up the colorful and perfectly beautiful "dead heads" that were on the ground.  Armed with a bucket full, she immediately started using her creativity when we returned home: 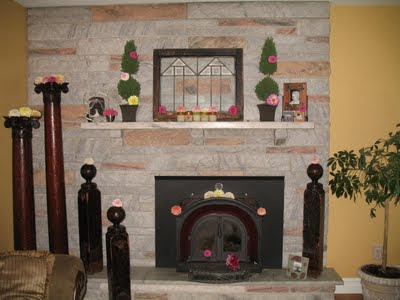 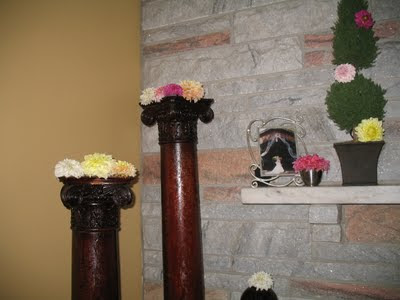 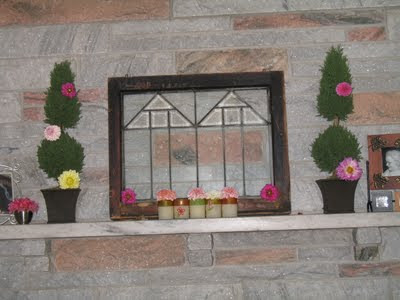 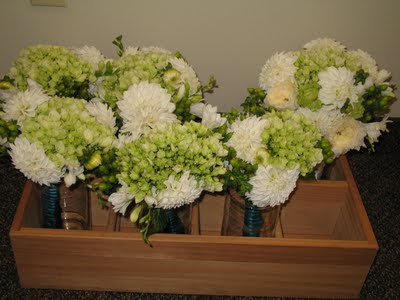 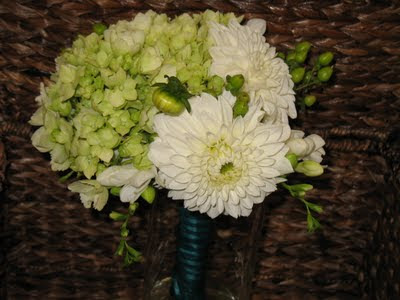 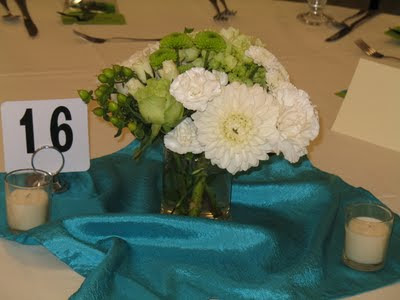 I'll share more wedding day photos as soon as I see them.  In the meantime, you might see some of my wedding day snapshots show up on the Forrester Farm Facebook Page - or here on the blog :)!
Posted by Forrester Farm Notes at 5:20 PM 2 comments:

...from my garden to you.  Happy Wednesday! 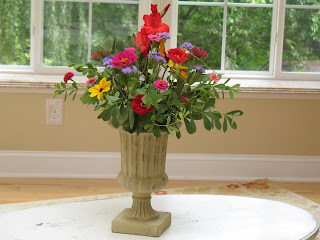 Posted by Forrester Farm Notes at 1:41 PM No comments:

The Summer of the French Chicken....

It happened the summer of 2010.  We had a sweet girl from France come to intern with Forrester Farm for 10 weeks.  Alize and 64 other agricultural students from Esipta, needed to secure 8 weeks of internship experience in an English speaking country.  Alize found us through Local Harvest, and I'm so glad that she did.  We worked, played, camped and worked some more.  The internship was as much about helping with Forrester Farm weddings and flowers as it was about experiencing the culture of the area.  We learned from Alize and she learned from us.  She even changed her opinion about camping being only for "old people"! 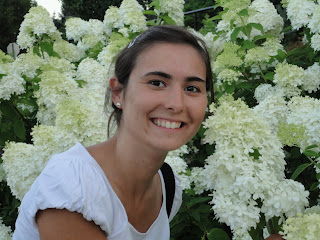 While Alize was with us, we needed to construct a chicken coop for our little flock that we had purchased in the spring.  Inspired by a friend who mentioned turning a corn crib into a gazebo, my husband and I decided to use that idea for a chicken coop.  We tend to optimistically jump into a project, only to realize later just how long that project might take.  It really became the whole summer project - between my husband's work, Forrester Farm weddings, farmer's market vending days, camping and some other fun excursions like ice cream runs, trips to the beach and outdoor concerts.  By the end of the summer, I had decided that the summer of 2010 would always be remembered in my mind as the Summer of the French Chicken.


Here is the completed coop.  We do just want to paint the roof yet.  I love that we can gather eggs from the little doors on the outside - they open into the nesting boxes for easy gathering. 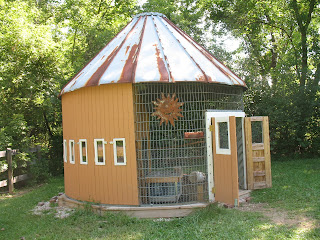 Cooped up and ready to be set free: 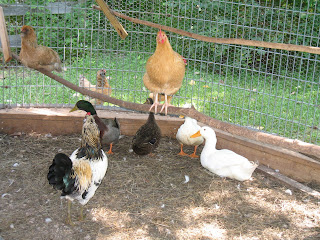 Our favorite rooster of all time - Henry.  He would actually run to us if we called his name.  Alize loved picking him up. 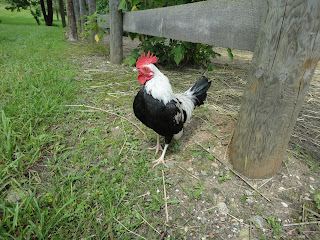 If Alize were with us this summer, I know that she would be smiling at the new flock additions. 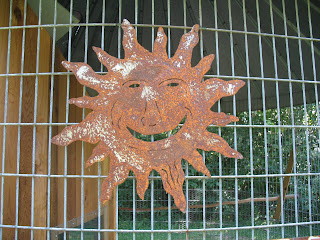 At the end of the summer 2010, our coop was completed, Alize returned to France, and ever since, she refers to me as her American mum.  I gained a "French daughter", a friend, and so many memories.
Posted by Forrester Farm Notes at 4:13 PM 2 comments:

just a little about the author

The Knot Best Of Weddings 2023

The Knot Best of Weddings 2022

Read all of our Wedding Flowers Reviews at